5/5 – (1 vote) Anyone working in IT industry has at least of experience with DNS request failure which can be quite disturbing in this post in the continuous series of Avanetco blog we are going to check nslookup commands as a great way to deal with that problem. nslookup is used to query a […]

5/5 – (2 votes) Docker has become an inseparable part of projects due to its flexibility and advantages it brings to a development team in this post we’re gonna take the first step in our blog on the road to learning docker by How to install docker on linux. Before we start let’s clarify a […]

How to extend partition in windows

5/5 – (1 vote) To extend partition in windows you have to add the amount of desired capacity and then considering windows limitations for extending a new partition decide which way to add it. we have also covered this topic for linux as well. increasing capacity can be done two ways you can extend an […]

How to increase Linux partition

5/5 – (1 vote) If you are an system admin you know that the scenario where you have to increase Linux partition happens more than often as data grows you may need to extend a partition or a disk so in this post in the series of Avanetco linux guides we’ll cover that. when you […]

How to connect to remote desktop

5/5 – (2 votes) In this article we are going to cover a simple yet so practical job on how to connect to remote desktop. when a user buys a VPS or a dedicated server depending on their OS they need to remote to that server as well as console connection. remote desktop connection is […]

How to install nodejs on ubuntu

5/5 – (2 votes) As many of you may know nodejs popularity has risen in recent years. as it speeds up site loading time because everything is loaded on client side so we are going to see how to install nodejs on ubuntu nodejs is usually used with nginx so we are going to cover […]

How to Create MySQL Database in Cpanel

5/5 – (2 votes) A MYSQL database is an organized collection of data, generally stored and accessed electronically from a computer system ، The MySQL user is a record in the MySQL server created for authentication purposes. This is different from the usernames you use in logging into Windows or even in your cPanel/WHM. Setting […]

How to configure redirects in cPanel

5/5 – (3 votes) A redirection occurs when a web server redirects a visitor from one web page to another web page. A common use of redirection is to create shorter, easy-to-remember URLs that redirect to longer URLs. Another use is to redirect visitors from old pages on a web site to newer, updated web […]

how to SSH into a linux server

In this article we are going to cover how to connect to a server weather it is a physical or a Virtual server you can .  connect to it from anywhere around the globe through SSH. so lets get to how to SSH into a linux server

if you are using a linux-unix base sever to connect through SSH you do not need any third party applications. simply type the command below

if you use a windows os to SSH into a linux server you need an additional program like putty. like the picture below provide the ip and port in the program if the connection is made you should enter username-password and get the terminal. 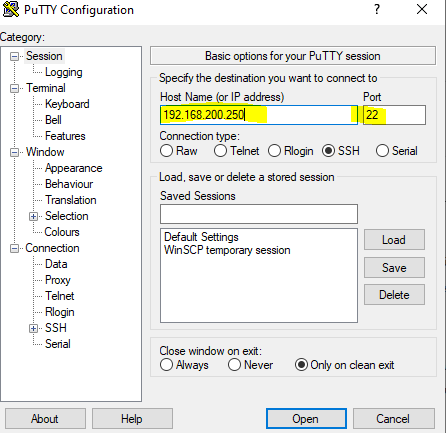 errors happening because of network setup and firewalls are the same as windows and you should follow the same steps like using ping and traceroute commands and stopping firewall or selinux on the destination.

a user should be given the permission to ssh the server specially for ubuntu servers. and you might see errors that the easiest way to work around them is to try a different program.

and last but not least if the steps above did not solve your problem then inform your hosting providers.